Each and every product developed by Kyani is a result of extensive research. Highly renowned scientists and doctors with a diverse range of backgrounds use their specialties to create every Kyani product. With backgrounds in nutritional, internal, and biological specialties, these respected professionals incorporate the latest science and technology to choose every ingredient. To understand more about the proven power behind Kyani’s products, read on to learn the research, details, and benefits of some of Kyani’s star products and ingredients.

Kyani’s Triangle of Health Products: The Power of Nature and Science

Kyani’s Triangle of Health consists of three innovative, advanced nutritional supplements: Sunrise, Sunset, and Nitro FX. Each formula has been carefully tested for safety, studied extensively, and proven to contain some of the most potent ingredients in the world. 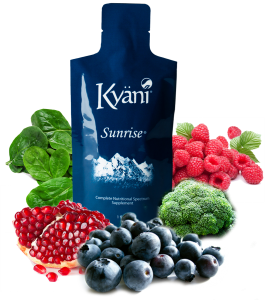 Along with 20 essential vitamins and minerals, Kyani Sunrise also contains wild blueberries harvested in Alaska. Numerous studies have proven that Wild Alaskan blueberries possess higher antioxidant levels than traditional blueberries due to the harsh environmental conditions they must endure. Blueberries are well known for their health-enhancing properties that result from their high levels of potent antioxidants.

Another star ingredient in the Kyani Sunrise is Red Raspberries. This delicious fruit is packed with antioxidants such as quercetin, gallic acid, and Vitamin C that help fight inflammation, free radicals, and age-related issues. Their stunning red color is a result of powerful substances that also possess noteworthy health benefits.

Yet another impressive ingredient in the Sunrise formula is grapes. Grapes are well-known for their ability to help preserve a variety of the body’s system. Their power is largely a result of resveratrol as well as epicatechin, proanthocyanidins, and antioxidants.

As suggested by the name, Kyani’s Sunrise formula makes an ideal morning supplement to start the body off on the right nutritional path for the day.

Kyani’s Sunset formula also contains Omega 3s, powerful fatty acids that have been proven to have a positive impact on cholesterol levels, cardiovascular health, mood, and inflammation. Since the body cannot make these crucial fatty acids, they must be obtained through a healthy diet. The majority of Americans fail to get enough Omega 3s in their diet. The Omega 3 fatty acids in Kyani’s Sunset are derived from Wild Alaskan Sockeye salmon and other wild fish. Each serving of Kyani Sunset contains a proprietary blend of Omega 3s in the form of EPA and DHA.

Another important component in the Sunset formula is Beta-Carotene (Vitamin A). 5000 IUs of Vitamin A can be found in each serving of Kyani Sunset. Vitamin A serves as an antioxidant, supports healthy visions, and much more.

Cholecalciferol (Vitamin D3) is also incorporated into Kyani’s Sunset formula. A growing number of studies are finding that Vitamin D3 is even more important than previously thought. Although the body can produce sufficient Vitamin D through sun exposure, air pollution, increased time indoors, increased use of sunscreen, and other factors mean many people are not getting enough of this crucial Vitamin. To ensure that the requirement for this powerful Vitamin is met, each serving of the Sunset formula contains 400 IU of Vitamin D3.

Kyani Sunset boasts the title of being the only nutritional supplement to combine the power of Omega 3s with Tocotrienols along with Vitamin A and Vitamin D3. 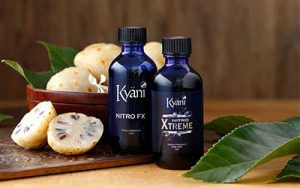 Another powerful player in the Triangle of Health is Kyani Nitro, available as FX (the original formula) or Extreme. Nitric Oxide has proven benefits in every single cell of the body. This powerful molecule can help lead to improved circulation, a boost in energy, reduced inflammation, and a strong immune system.

Although the body could not survive without Nitric Oxide, it only remains active in the body for a few seconds at a time. During this time, it activates a particular enzyme that has an important impact on the cardiovascular system. Since the entire body, particularly the cardiovascular system, relies on Nitric Oxide, getting enough is crucial to performance and health. For this reason, Kyani’s Nitro line, consisting of Nitro FX and Nitro Extreme, features a proprietary blend of organic noni juice extract. When ingested, this unique extract mixes with stomach acid and gets converted into nitric oxide.

*These statements have not been evaluated by the Food and Drug Administration. This product is not intended to diagnose, treat, cure, or prevent any disease.